Language is a cognition that truly makes us human, whereas other species do communicate with an innate ability to produce a limited number of meaningful vocalizations (e.g. bonobos), or even with partially learned systems (e.g. bird songs), there is no other species known to date that can express infinite ideas (sentences) with a limited set of symbols (speech sounds and words). 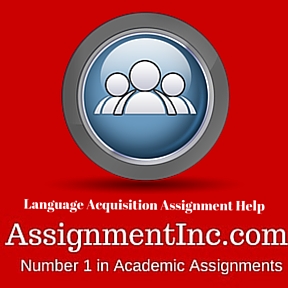 This ability is remarkable in itself. The researchers are finding evidence for mastery of this complex skill in increasingly younger children. Infants as young as 12 months are reported to have understanding to the grammar needed to understand causative sentences.

After more than 60 years of research into child language development, the mechanism that enables children to segment syllables and words out of the strings of sounds they hear, and to acquire grammar to understand and produce language is still quite an enigma.

Many psychologists estimate we learn around 3,500 words a year between our first birthdays and before we are 30. We grow from infants without language to chatterboxes with a gift for gab, and researchers are fascinated by how this happens.

Psychologists have different theories on language acquisition, or the process by which we learn to speak, write, or even use sign language in meaningful ways to communicate.

Over repeated exposures, infants may learn to associate an object with a sound or word for that object. An infant babbles ‘dada’, the infant is rewarded by smiling and happy parents who cheer and reward their child’s efforts at communication.  Infants may learn language by observing caregivers and imitating their sounds.

Linguist and philosopher Noam Chomsky (born in 1928) has added to how behaviorists like Skinner think about language development. Chomsky believes that infants and children learn language at a speed that cannot simply be explained by the laws of behaviorism. According to Chomsky, children learning language put words together in new ways, creating meaningful sentences they have never heard before. Chomsky argues that children learn rules of language and apply them in their own way. Children would not have heard adults using rules of language so inaccurately, Chomsky came up with another theory on language development.

Chomsky’s linguistic theory states that we are born with an innate ability to learn language and with little guidance, children will naturally learn language. Chomsky argues that we must be born with a language acquisition device, an area in our brains that makes learning language a natural event. As evidence, he points to the idea that children all over the world learn language in similar ways regardless of their culture or the language they learn to speak.

Almost all human beings acquire a language (and sometimes more than one) to the level of native competency, before age 5. Researchers have long debated the answers to these questions; however there is one thing that they agree on language acquisition is a complex process.

Most researchers agree that children acquire language through interplay of biology and environmental factors. A challenge for linguists is to figure out how nature and nurture come together to influence language learning.

One of the earliest scientific explanations of language acquisition was provided by Skinner. As one of the pioneers of behaviorism, he accounted for language development by means of environmental influence.

Skinner argued that children learn language based on behaviorist reinforcement principles by associating words with meanings. Correct utterances are positively reinforced when the child realizes the communicative value of words and phrases. For example, when the child says ‘milk’ and the mother will smile and give her some as a result, the child will find this outcome rewarding enhancing the child’s language development.

However, Skinner’s account was soon heavily criticized by Noam Chomsky, the world’s most famous linguist to date. In the spirit of cognitive revolution in the 1950’s, Chomsky argued that children will never acquire the tools needed for processing an infinite number of sentences if the language acquisition mechanism was dependent on language input alone.

Consequently, he proposed the theory of Universal Grammar such as an idea of innate, biological grammatical categories, such as a noun category and a verb category that facilitate the entire language development in children and overall language processing in adults.

Universal Grammar is considered to contain all the grammatical information needed to combine these categories, e.g. noun and verb, into phrases. For instance, according to the Universal Grammar account, children instinctively know how to combine a noun (e.g. a boy) and a verb (to eat) into a meaningful or correct phrase (A boy eats).

This Chomskian (1965) approach to language acquisition has inspired hundreds of scholars to investigate the nature of these assumed grammatical categories and the research is still ongoing.

A decade or two later some psycho linguists began to question the existence of Universal Grammar. They argued that categories such as noun and verb are biologically, evolutionarily and psychologically implausible and that the field called for an account that can explain for the acquisition process without innate categories.

Researchers started to suggest that instead of having a language-specific mechanism for language processing, children might use general cognitive and learning principles.

Whereas researchers approaching the language acquisition problem from the perspective of Universal Grammar argue for early productivity, i.e. early adult-like knowledge of language, the opposing constructivist investigators argue for a more gradual developmental process. It is suggested that children are sensitive to patterns in language which enables the acquisition process.

An example of this gradual pattern learning is morphology acquisition. Morphemes are the smallest grammatical markers, or units, in language that alter words. In English, regular plurals are marked with an –s morpheme (e.g. dog+s). Similarly, English third singular verb forms (she eat+s, a boy kick+s) are marked with the –s morpheme. Children are considered to acquire their first instances of third singular forms as entire phrasal chunks (Daddy kicks, a girl eats, a dog barks) without the ability of teasing the finest grammatical components apart.

However, finding a solid answer to the problem of language acquisition is far from being over. Our current understanding of the developmental process is still immature. Investigators of Universal Grammar are still trying to convince that language is a task too demanding to acquire without specific innate equipment, whereas the constructivist researchers are fiercely arguing for the importance of linguistic input.

The mystery of language acquisition is granted to keep psychologists and linguists alike astonished a decade after decade.